The Sexual Politics of a Marielito Activist 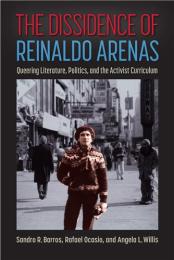 By Rafael Ocasio, coauthor of The Dissidence of Reinaldo Arenas: Queering Literature, Politics, and the Activist Curriculum.

This book is available at a discount price through May 31, 2022. Order here and use code LASA22 at checkout.

He knew prison, ostracism,
exile, the many crimes
typical of human vice;
but a certain stoicism was always with him
which helped him walk tightropes
or enjoy the morning’s splendor
(Reinaldo Arenas, Autoepitaph)

Although the recent public upheaval against the revolutionary government in Cuba, beginning in July of 2021, is of outstanding historical importance, I am reminded of earlier counterrevolutionary demonstrations that started on April 1, 1980, when a bus driver crashed his vehicle into the Peruvian Embassy in Havana. The chaos that followed led thousands of individuals to seek asylum at the embassy. As the numbers of protestors increased to unimaginable numbers, they too were negatively categorized as “undesirables,” eventually forcing the Cuban government to allow them to abandon the Island. Between April 15 and October 31, a huge mass of individuals seeking status as refugees reached Florida’s shores through the Mariel Boatlift. It provided an outlet for “undesirables and antisocials,” amongst them homosexuals, referred to as escoria [scum] by the Cuban Regime. Among those 150,000 “Marielitos” was Reinaldo Arenas (1942-1990).

A novelist, short story writer, poet, and playwright in Cuba, Arenas boldly challenged the revolutionary code of acceptable sexual behavior through homoerotic practices intended as expressions of personal and political discontent. He arrived in Key West on May 5, penniless and stripped of his literary work in progress. Through his self-promoted public image as a “Marielito” and as a “homosexual,” according to the U.S. jargon of the early eighties, Arenas soon became a notorious critic of the Castro regime. During his exile period, one year in Miami and nine in New York City’s Hell’s Kitchen, Arenas proudly maintained a Marielito image despite the rather negative associations with the label. He also began a progressive coming-out process that involved revealing select details about his own criminal case—he had been found guilty of a moral crime as “corruptor of minors”—for which he served a two-year sentence in jail.

Given today’s hyper-sexualized images in popular culture, particularly in literature, Arenas’s choice to publicly flaunt queer behavior may seem unremarkable. Following the public activism of U.S. Queer groups such as Radical Faeries (1979), Arenas was prone to reveal not only his own sexual orientation and erotic adventures, but controversially also that of his friends and his opponents. Although these outings may be construed less as a political weapon than as a means for personal revenge, in the largely self-censoring and homophobic climate of the early 1980s, Arenas became one of the first Latin American writers to speak openly about his personal life as a gay man. He was also fighting for freedom to explore openly gay themes in his writing , a subject that became central to the literary writings completed in his exile period.

Who was this Cuban activist who, some thirty-one years after his death, still resonates as a model for gay Latino activists in the U.S. and inspires pro-gay grassroots organizations in Cuba? This question drives my forthcoming book, The Dissidence of Reinaldo Arenas: Queering Literature, Politics, and the Activist Curriculum, co-written with Sandro Barros (Michigan State University) and Angela Wills (Davidson College), which attempts to explore how Arenas’s role and pedagogical activism as a Marielito and sexual outlaw continues to inspire activists in Cuba and the U.S. His counterrevolutionary political agenda was linked to his literary production, which was heavily inspired by graphic autobiographical sexual practices. Indeed, Arenas’s conceptual approach to homoerotic activism as an integral part of acts of political discontent was akin to mainstream Queer activists, such as Act-Up, a group founded in New York City in 1987.

Arenas became one of the first Latin American gay writers residing in the U.S. to become directly associated with Queer literary aesthetics. From his home base, he worked on manuscripts—smuggled out of Cuba—of stories and novels characterized by highly eroticized plots censored by the official Cuban publishing establishment. This production was intended to complement his political writings, bringing together political and sexual activism as agents of social change. While writing as an out-of-the-closet intellectual, he maintained an outlaw agenda that served him as a life curriculum of-sorts, as he had while in Cuba. He continued to engage in sexual relations considered taboo, and his preference for sexual activities in public places and unprotected sex was fully documented in his autobiography and private correspondence.

Ultimately, in his self-promoted identity as a Queer Marielito writer, Arenas displayed no fear that his (homo)sexualized literary activism could result in failure to attain financial success, as it partially did. Nonetheless, his success was evident in his frequent counterrevolutionary campaigns. ​​In 1988, near the end of his life, while fighting debilitating AIDS-related conditions, he staged his last public anti-Castro campaign. With exiled Cuban painter Jorge Camacho, he co-wrote an open letter to Fidel Castro demanding the celebration of free elections in Cuba. The pro-plebiscite letter was published in several well-known international newspapers, including Le Monde, The New York Times, and the Miami Herald, and carried the signatures of dozens of international artists and intellectuals.

Because of advanced AIDS, Arenas committed suicide on December 7, 1990. His outlandish behaviors—whether at the personal level, as in his many confrontations with dissenting critics, or in his highly eroticized literary explorations—embody the fearless activist role he cultivated that so many readers remember him by today. Arenas would become the most radical figure of an emerging cohort of Latino and Latin American gay activists in the United States, a mentorship role that has yet to be surpassed in intensity and in its rawness of expression.

Rafael Ocasio is the Charles A. Dana Spanish Professor at Agnes Scott College and coauthor of The Dissidence of Reinaldo Arenas: Queering Literature, Politics, and the Activist Curriculum.

2 thoughts on “The Sexual Politics of a Marielito Activist”