Where in the World Does Your Food Come From?

Written by Amanda Harris, author of Fruits of Eden

Throughout his life, David Fairchild was America’s best-known plant explorer. He and a small group of other dedicated botanists, who each loved eating and traveling and swapping adventure stories, helped to transform American food. When they started their work at the end of the nineteenth century, most meals served in the United States consisted of standard farm fare. When they finished, Americans were able to enjoy a cornucopia of tasty, colorful fruits and vegetables that U.S. farmers had grown from seeds the plant hunters had collected from around the world. 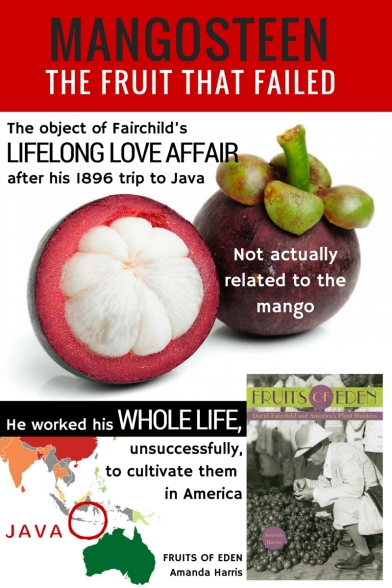 The mangosteen was Fairchild’s first and favorite exciting discovery. Its tough reddish-brown shell hides a sweet creamy white fruit inside. In 1896 Fairchild, then a young scientist a long way from his home in Manhattan, Kansas, was offered a mangosteen as a snack while he was resting on the veranda of his hotel in Java. Despite decades of trying, Fairchild could never get mangosteen trees to grow in America, even in the semi-tropical climate of southern Florida. He came closest in 1945 when he imported about thirty tons from Honduras and served them to members of the Fairchild Tropical Garden, a botanical center in Miami that Fairchild’s friends built to honor his work.

He had better luck with mangoes (which, curiously, have no known botanical connection to mangosteens). Fairchild started eating mangoes and saving their seeds when he was touring Southeast Asia with Barbour Lathrop, the Chicago investor who financed his early travels. Fairchild collected mango seeds from all over the world and sent them to be grown at experimental gardens in America. But that project was also a challenge. The first mangoes available in America had a peculiar smell, a taste like turpentine and a bad reputation.

After exploring with Lathrop, Fairchild became agricultural explorer in charge of seed and plant exploration for the United States Department of Agriculture (a long-winded title that Fairchild loved). In the early days of his job, he gave a mango to his boss, the U.S. Secretary of Agriculture, who was a former hog farmer from Iowa with no interest in eating exotic food. The secretary wouldn’t eat the mango and gave it to a friend. The friend wouldn’t eat it either and gave it to his gardener. His gardener wouldn’t eat and gave it to his chickens. Even the chicken wouldn’t eat Fairchild’s mango. But slowly and carefully, plant breeders and farmers concocted domestic varieties that tasted good and were tough enough to be shipped safely around the country. Today’s popular varieties like the Tommy Atkins are the direct descendants of the mangoes Fairchild cultivated.

Fairchild didn’t introduce the first avocados to America; the fruit was imported from Mexico and the Hawaiian Islands. But by 1915 the fruit was so expensive—about $23 each in today’s dollars—that only wealthy Californians could afford to eat them. An avocado was then called an alligator pear because of its tough skin and shape. Fred Popenoe, the owner of a tropical plant nursery in Southern California who was looking for a way to get rich, promoted growing the fruits as a good investment. (He thought it would be even better than the gold mine in Costa Rica where he had lost his first fortune.) To help farmers identify types that could thrive out west, Fairchild hired Fred Popenoe’s son Wilson as an explorer for the federal government. Popenoe systematically collected and tested varieties from most of the countries in Central and South America. Fred Popenoe never got rich but Americans welcomed a plentiful local supply of the healthy, delicious fruit for their table. Fairchild considered the avocado to be the nutritionally perfect food. 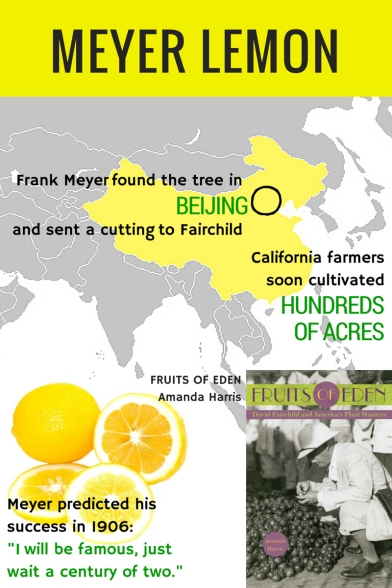 Each of Fairchild’s explorers braved physical danger, disease, and extreme weather to collect seeds and plants. But Frank Meyer, a Dutchman who worked for Fairchild for 13 years, had the most daunting assignment. He hunted throughout China and Central Asia, lands without roads, usually alone and on foot. Meyer found thousands of promising plants, including early examples of the soybeans that created the huge industry that dominates American agriculture today. But he is best known for discovering a dwarf lemon tree in the doorway of a house near Beijing. Fairchild named it the Meyer Lemon and researchers found ways to make the plant adapt to American growing conditions. It is now an abundant crop in California and the fruit is a popular ingredient for serious cooks because of its sweet but acidic taste.

Meyer, a moody and restless man who worked hard for the U.S. government, disappeared mysteriously one night from a freighter on the Yangtze River. But before he died, he promised his family that his plant hunting adventures were worth the risks and hardship he faced.

Amanda Harris, author of Fruits of Eden, was for many years a reporter and editor at Newsday, the Long Island and New York City daily newspaper. She lives in Manhattan and Montcabrier, France, with her husband, Drew Fetherston. She is also the granddaughter of Alice Barton Harris and the daughter of Robin Franklin Harris, who was Marian Fairchild’s godson.

One thought on “Where in the World Does Your Food Come From?”