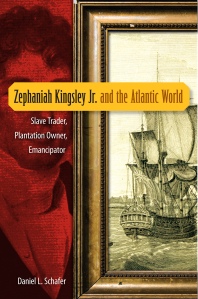 “A visit to Kingsley Plantation… convinced me that this was a topic of national and international importance that had somehow escaped scholarly attention.’”

DANIEL L. SCHAFER Professor of History Emeritus and University Distinguished Professor at the University of North Florida, is the author of several books, including Anna Madgigine Jai Kingsley, William Bartram and the Ghost Plantations of British East Florida and Thunder on the River: The Civil War in Northeast Florida.

In this penetrating biography, Daniel Schafer vividly chronicles the evolving thoughts of Zephaniah Kingsley Jr. (1765-1843)  on race and slavery, exploring his business practices and his private life. A controversial figure for his views on manumission and his unorthodox marital arrangements, Kingsley is mostly known today for his Fort George Island plantation in Duval County, Florida, now a National Park Service site, and for his 1828 pamphlet, A Treatise on the Patriarchal System of Society, that advocated just and humane treatment of slaves, liberal emancipation policies, and granting rights to free persons of color. Paradoxically, his fortune came from the purchase, sale, and labor of enslaved Africans.

UPF: This isn’t your first book about the Kingsleys, as you’ve also written about one of Zephaniah’s “wives,” Anna Madgigine Jai Kingsley. How did you become interested in Anna, Zephaniah, and the Kingsley Plantation in Florida?

DS: A visit to Kingsley Plantation (then a Florida State Park, now a National Park System site) and casual reading of what little had been published about the Kingsley family in northeast Florida, convinced me that this was a topic of national and international importance that had somehow escaped scholarly attention. Thus began a nearly four decade search for pieces to fit into the Kingsley puzzle, a search that led me to archives throughout the U.S., Canada, Great Britain, Africa, and the Caribbean. The decision to write a separate book about Anta Madgigine Ndiaye (Anna Jai Kingsley) came after I recognized that her poignant life-story was overshadowed by the larger-than-life persona of Zephaniah.

UPF: What was Kingsley’s attitude toward public opinion?

DS: It was important to Kingsley that his reputation as a maritime merchant and a ship captain was respected by business men in various Atlantic ports, but he was in general disdainful of public opinion.  After observing his father’s financial disasters and banishment from South Carolina for loyal support of Great Britain during the American Revolution, Kingsley Jr. focused on amassing a fortune from participation in the Atlantic slave trade and from the labor of enslaved Africans. He lived openly with a large mixed-race family consisting of himself as patriarch and several enslaved African women he fathered children by and emancipated, apparently oblivious to the judgments of his Christian and mostly monogamous contemporaries.

University Press of Florida (UPF): How is your day structured when you write? What’s your writing routine?

Daniel Schafer (DS): I generally travel to research archives in the winter and spring and fit in writing when possible. Most of my article and chapter drafts have been completed at a summer home in Corea, Maine that Joan and I have owned for the past thirty years. I don’t have a set routine, although I prefer to write in the early morning. I’m usually at work by the time the sun comes up, which is early in “Down East” Maine.

UPF: What are you currently reading?

UPF: What are you working on next?

DS: My current research topic is a historical biography of Dr. Andrew Turnbull  (1720-1792), a Scot physician employed by the Levant Company at Smyrna, Turkey who partnered with two wealthy and influential British men to found a huge settlement in British East Florida. In 1767 and 1768, Turnbull traveled to East Florida to select land for the settlement, then sailed throughout the Mediterranean recruiting 1403 Italians, Greeks, and Minorcans as indentured laborers. Hundreds of Mediterranean families were transported to adjoining 20,000-acre wilderness tracts at Mosquito Inlet on Florida’s Atlantic Coast (today at New Smyrna Beach and Edgewater, Florida). A staggering death rate, a rebellion, hurricanes, droughts, food shortages, and severe financial shortfalls followed, yet there were heroic accomplishments by the laborers. The American Revolution and a bitter and vindictive conflict between Turnbull and the British governor, Colonel Patrick Tonyn, led to the demise of the Smyrnea settlement.

View all posts by montealegreisabella

One thought on “The Intriguing, Paradoxical Zephaniah Kingsley Jr.: Q&A with Daniel Schafer”