Ronald D. Lankford, Jr. is an independent scholar and author of Sleigh Rides, Jingle Bells, & Silent Nights. He is currently working on a cultural history of Rudolph the Red-Nosed Reindeer for the University Press of New England.

My wife and I took a day off recently to catch up on fall/winter clothes shopping. We stopped at JC Penney, inside the local mall, where we were greeted with Christmas decorations and gifts in the store’s lobby. In Ladies’ Apparel, we also tuned into a continuous stream of holiday music.

A day or two later, I no longer remember which songs I heard. What I do remember is how much louder the music was when we reached the sales counter: a speaker, directly above, reigned down Christmas cheer.

According to a recent New York Times article, round-the-clock Christmas music is arriving earlier (and earlier) at a number of easy-listening stations. It’s a popular format with listeners and popular with advertisers (stations can sell eight-week advertising packages). And it continues to grow as a format despite competition from internet radio.

There are a couple of points worth making, I think. While many people complain about Christmas music arriving too early (“I was in Bojangles’, just three days after Halloween, and guess what I heard?”), these folks are, I believe, behind the times (unless they just enjoy complaining). The idea that Black Friday initiates the Christmas season in America is deader than Jacob Marley.

Today, the holiday season officially begins the day after Halloween. By 8:00 am on November 1st, the Christmas candy has been stocked by the Walmart elves. That’s when the buildup for Black Friday starts. And that’s when it’s time for Christmas music—the ritual backdrop to this whole affair—to take over easy listening radio (or SiriusXM radio in the mall).

But is this a good thing? Does this fly in the face of a traditional American Christmas? And, most importantly, what would Santa do?

Personally, I wish they’d wait. My wife and I never play holiday tunes in the car or at home until the day after Thanksgiving. Waiting, I believe, makes the warm embrace of nostalgia even sharper. I don’t want to watch Rudolph the Red-Nosed Reindeer on November the 3rd and I don’t want to hear “White Christmas” until it gets (in Virginia) nice and chilly.

Having said that, I rarely listen to radio and rarely visit the mall, which means I’m mostly able to avoid early Christmas music. I prefer—being very picky about all the music I listen to—to build my own Christmas playlist. 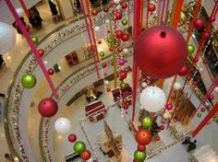 Still, there is a price to pay for Christmas music overkill. There is so much good Christmas music that listeners will never hear (because it’s too old fashioned; because it has never been popular) and other songs that will be repeated in an endless loop. Some people, probably without realizing why, will grow to dislike holiday music (perhaps the children of adults who are now listening to holiday music 24/7).

The people I really feel sorry for, though, work in retail and simply cannot get away from piped-in Christmas music. Like the young woman who waited on my wife and I at JC Penney. For four, six, and eight hour shifts, she will listen to a steady stream of holiday mush. I wouldn’t be surprised if she already feels rather ill, as though she’d eaten one too many candy canes. Even so, Bing and Nat and Perry will continue to croon to her from that speaker above the counter for another six weeks.