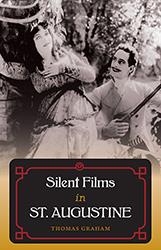 By Thomas Graham, author of Silent Films in St. Augustine

As I did research for my book Mr. Flagler’s St. Augustine, I frequently ran across newspaper stories about movie companies taking scenes in St. Augustine. It occurred to me that this would be a great topic for a book. To my surprise, once I started serious searching, I discovered more than 120 silent films that were shot in town between 1906 and 1926.

I don’t think many people today realize how important movies were in the days before radio started to compete as electronic media entertainment. Folks used to go to the movies two or three times a week. This generated a tremendous demand for films, and companies would grind out as many as two short films a week to meet the public’s appetite for drama.

At the time, the movie industry was centered in New York and the Northeast. But when cold, dark winter settled over the North, film companies came to Florida to shoot in sunshine and warmth. Movies were made in Florida before they were made in Hollywood! Jacksonville ranked first as a Florida’s movie venue, but just thirty-five miles to the south lay St. Augustine—America’s antique Spanish “Oldest City.” The colonial stone houses, narrow streets, and exotic architecture provided ready-made backdrops for making scenes supposedly set in Spain, France, Italy, and even India, China, and Hawaii. The “tropical” surroundings of the town could stand in for African jungles, while the sand dunes of the beach became deserts of the Sudan.

Watching some of the few St. Augustine films that survive today is especially entertaining because we can recognize locations that haven’t changed much since then. Edison’s actors emote for the camera in front of the City Gates, Thanhouser’s thespians act their parts in the confines of the Castillo, and Rudolph Valentino engages in a fistfight in the courtyard of the Hotel Ponce de Leon.

I hope you’ll enjoy these photographs from an amazingly creative time and place in the history of American moviemaking.