The Evidence for Insect Eating in Human Evolution

Unlike the archaeological record for meat eating, which contains evidence from numerous sites of butchered bones with marks left by stone tools, the evidence for insect eating is scarce.

However, this does not mean that insects were not an important part of hominin diets in the past. Insect eating rarely leaves any trace. Not only do the insects often get consumed in their entirety, but the tools that are used to collect them are often perishable and are not preserved in the archaeological record.

Despite the rarity of evidence, some clues remain. In 2001, researchers demonstrated that bone tools found at the site of Swartkrans in South Africa were used to dig into termite mounds. The microscopic wear patterns preserved on the 1.8 million year old artifacts best matched experimental tools used by the researchers to dig into termite mounds as opposed to other tasks such as stripping bark off trees or digging for tubers.

My book Edible Insects and Human Evolution reconstructs the scene set up by these bone tools by integrating multiple lines of anthropological evidence. In order to understand how insect consumption has changed over the course of human evolution, I rely on the work of ethnographers who have recorded how foraging populations of people use insects in their diets and the work of primatologists who study how our primate cousins consume insects.

Chimpanzees are our closest living relatives, and although the last common ancestor between us and them was neither human nor chimpanzee, the skills of this ancient hominin likely resembled what we are both capable of doing, such as using simple tools to acquire food.  In Figure 1, you can see how chimpanzees use a flexible stem of vegetation in order to “fish” termites out of their nests (Fig. 1A). I use this same method (Fig. 1B) when collecting termites for chemical analyses. But a more efficient way taught to me by South African women who sell termites in markets is to combine multiple stems into a “broom” (Fig. 1C) and dip it into a hole dug into the inner chamber of the mound.

Therefore at 1.7 million years ago the hominins who used the bone digging tools found in South Africa were using tools beyond what is used by chimpanzees in order to extract termites from their nests (Figure 2). Digging into the mound creates the opportunity to collect more termites as well as different kinds of termites, such as fat-rich larvae that cannot be extracted with fishing tools since they do not have pincers.

With the evolution of Homo erectus, even more advanced techniques were likely used to collect a wider range of insects. One of the most important advances, which is another that does not preserve in the archaeological record, would have been a basket or other container that could have been used to bring the collected insects back to home bases.

Insects, as opposed to hunted game, are considered a “gathered” resource. Gathered resources tend to be easier and more consistent to collect, and women—who often have their children with them on foraging trips—target these resources more than men. Not only does gathering these foods keep children largely out of harm’s way, but it also provides a more reliable stream of nutrients, which is important to expectant and nursing mothers whose nutritional demands increase greatly when they are eating for two. This pattern is not only widespread across human foraging populations but is also seen in our primate cousins. Reconstructing the role of insects in the hominin diet therefore brings attention to activities that were likely done most often by female hominins.

Insects have been a reliable food source for people living in the tropics for millions of years. Environments farther from the equator, like those of Europe, Canada, and the northern United States, are less conducive for insect consumption. The availability of insects in these regions is seasonal and they are most available during times of the year when most foods are abundant, so it is not surprising that they were not a major part of traditional diets there.

The contemporary stigma against eating insects comes from a complicated colonial history in which eating insects was considered something only “uncivilized” people would do. Those perceptions still persist today. We are all products of our upbringing, and, just like most Americans, I had a deep-rooted bias at first against the idea of eating insects. But through studying their nutritional value and their likely importance over the course of human evolution, I challenged myself to try eating them, and today I am an advocate for a growing insect foods industry.

Compared to traditionally raised livestock, insects are much more efficient at converting their feed into nourishment for us. In general, this efficiency increases as size decreases, so chickens are more efficient than pigs which are more efficient than cattle. Insects such as crickets represent the most efficient conversion ratios for terrestrial fauna. As the world looks for more sustainable ways to feed its growing population, insects offer an intriguing possibility.

And it is easy to incorporate insects into our diets. First off, they can be hidden. Cricket powder, made of 100% ground crickets, can be used like a protein powder and added to smoothies or used to create other foods such as baked goods, protein bars, chips, and more (Figure 5A). More adventurous eaters can enjoy whole insects incorporated into favorite dishes like kabobs (Figure 5B), tacos, sushi . . . you name it.

I challenge you to open up your mind to this food. Millions of years of consumption is a pretty good endorsement. If you cannot bring yourself to eat insects, that is perfectly fine, but I hope you can see their value and will let these more positive aspects color how you speak about insect eating. This food source may be really important to future generations and we need to start paving the way for its acceptance. 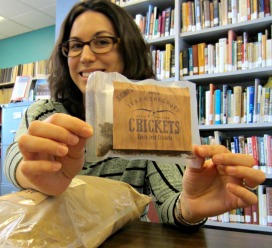 In this video, Julie Lesnik talks about the potential of insects as a food source in the United States.