The Emergence of Capitalism in Early America 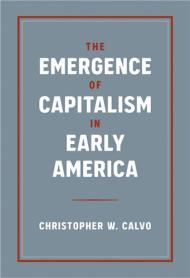 “An excellent and wide-ranging discussion of early nineteenth-century political economy in America, showing it to have been the by-product of dialogue with European luminaries and particular American material and intellectual needs.”—Brian Schoen, coeditor of Between Sovereignty and Anarchy: The Politics of Violence in the American Revolutionary Era

Due to the enormous influence of Adam Smith’s The Wealth of Nations on Western liberal economics, a tradition closely linked to the United States, many scholars assume that early American economists were committed to Smith’s ideas of free trade and small government. Debunking this belief, Christopher W. Calvo provides a comprehensive history of the nation’s economic thought from 1790 to 1860, tracing the development of a uniquely American understanding of capitalism.

The Emergence of Capitalism in Early America shows how American economists challenged, adjusted, and adopted the ideas of European thinkers such as Adam Smith, David Ricardo, and Thomas Malthus to suit their particular interests. Calvo not only explains the divisions between American free trade and the version put forward by Smith, but he also discusses the sharp differences between northern and southern liberal economists. Emergent capitalism fostered a dynamic discourse in early America, including a homegrown version of socialism burgeoning in antebellum industrial quarters, as well as a reactionary brand of conservative economic thought circulating on slave plantations across the Old South. This volume also traces the origins and rise of nineteenth-century protectionism, a system that Calvo views as the most authentic expression of American political economy. Finally, Calvo examines early Americans’ awkward relationship with capitalism’s most complex institution—finance.

Grounded in the economic debates, Atlantic conversations, political milieu, and material realities of the antebellum era, this book demonstrates that American thinkers fused different economic models, assumptions, and interests into a unique hybrid-capitalist system that shaped the trajectory of the nation’s economy.

RESISTANCE REIMAGINED explores 19th- and 20th-century writings by Black women that reimagine antebellum America, highlighting unconventional modes of Black activism within a society that has spoken so much of freedom but has granted it so selectively. You can find the book at upress.ufl.edu. #WomensHistoryMonth #InternationalWomensDay
Loading Comments...
Comment
×
%d bloggers like this: