LibraryPress@UF, a collaboration between the University of Florida Press and the UF George A. Smathers Libraries, seeks to foster the creation, promotion, access, and preservation of research and creative works in support of teaching, research, and the public sphere. The LibraryPress@UF features content that aligns with the mission and strategic directions of the Libraries, including limited editions, UF campus specific works, and books developed from the library collections. Opening the Gates to Canal Cuisine: Preserving the American Era

by the Panama Canal Museum

The transfer of the Panama Canal to the Republic of Panama at the end of 1999 marked the end of a special and unique relationship between the United States and Panama that endured over 96 years. It is important to note the significant roles played in the 20th Century by those two countries in the development of world commerce and to acknowledge the sacrifices and contributions made by the thousands of men and women who participated in this great enterprise.

The community of people who contributed to the Canal effort was wide and varied–American and Panamanian, French, West Indian, Spanish, European, Asian, Indian and many other nationalities all came together to help build the Canal. They and many of their descendants who stayed to work in Panama remain imbued with the rich and fascinating cultures of all the participating nations.

This incredible cookbook, filled with hundreds of recipes that were used by people of all nationalities during the American Era, represents the merging of all those cultures. It aims to preserve the unique cultural and historical heritage of those dedicated men and women who labored to make the Canal truly one of the World’s greatest accomplishments.

by the Panama Canal Museum

When the United States took on the building of the Panama Canal in 1904, workers were faced with extremely difficult living conditions. The tropical diseases such as malaria and yellow fever plagued them just as they had the earlier French effort. The housing stock left behind by the French was dilapidated and inadequate.

About a hundred sets of beautifully drafted architectural plans left by the French came in handy for locating drains, etc., as the Americans made repairs to existing buildings. Some workers found insect ridden rooms in adjacent towns while others lived in tents or thatched huts near construction sites. Not wanting to endanger the lives of their families, most men left their wives and children behind.

What started out as a cesspool of disease and loneliness eventually emerged as a little piece of paradise for its Canal Zone residents. This book tells some of the stories of the various townsites scattered along the fifty miles of the Panama Canal Zone between the Atlantic and the Pacific Oceans. It also shares the fond memories of a few of its residents whose hometowns have changed since the Panama Canal was turned over to Panama on December 31, 1999, and the Canal Zone as they knew it was no more. 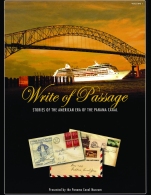 Write of Passage: Stories of the American Era of the Panama Canal

edited by the Panama Canal Museum

The building of the Panama Canal by the United States from 1904 to 1914 at the time was the most significant and monumental engineering achievement the world had ever seen. Its completion, despite incredible obstacles, changed the lives of thousands of people in nations around the world and brought to realization a centuries-old dream of connecting the Atlantic and Pacific oceans.

The brave and adventurous workers who went to Panama during the construction period faced unimaginable hardships on a daily basis; death was a constant companion as yellow fever, malaria and other tropical diseases took their toll. The family histories contained in this book document the incredible hardships faced by those early construction workers and provide a fascinating glimpse of life in Panama and the former Canal Zone during the American Era of the Panama Canal, from 1904 to 1999.

One thought on “LibraryPress @ UF: The Panama Canal Museum”