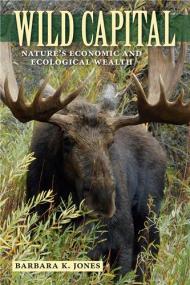 “Amasses a wealth of information pertaining to an urgent topic—how can modern humans co-exist with wildlife and their ecosystems in a sustainable manner?”—Roger L. Reep, coauthor of The Florida Manatee: Biology and Conservation

“In Wild Capital, Jones offers us a compelling and easily understood way to change how we value wildlife and wild lands. I encourage hunters, developers, and conservationists to study this book and learn how to make decisions that can lead to a much needed world full of wild nature.”—Rick Lamplugh, author of Deep into Yellowstone: A Year’s Immersion in Grandeur and Controversy

In Wild Capital: Nature’s Economic and Ecological Wealth, Barbara Jones demonstrates that looking at nature through the lens of the marketplace is a surprisingly effective approach to protecting the environment. Showing that policy-makers and developers rarely associate wild places with monetary values, Jones argues that nature can and should be viewed as a capital asset like any other in order for environmental preservation to be a competitive alternative to development.

Jones describes how the ecosystem services model, a tool that connects human well-being with the services nature provides, can play a critical role in assigning species and their habitats measurable values. She uses five highly recognizable animal species—moose, manatees, sharks, wolves, and bald eagles—as examples to show how highly valued charismatic fauna can serve as symbolic representations of entire ecosystems at risk. Through an emphasis on branding, incentives, and ecotourism, Jones advocates for channeling the social and economic power of these and other faces of nature to inspire greater environmental awareness and stewardship.

Contending that many people don’t realize how fiscally pragmatic environmental initiatives can be, Jones is optimistic that by recognizing the costs of habitat destruction and diminished biodiversity, we will make better choices regarding conservation and development. In doing so, we can more readily move toward co-existence with nature and a sustainable future.